Optimizely CMS is based on Microsoft technology and uses ASP.NET Core as a web development platform. Optimizely uses the SQL Server relational database. On top of that, Optimizely has a framework API used by products in the Optimizely platform.

Optimizely is based on the .NET5/ASP.NET Core, providing the following advantages:

In Optimizely, the .NET API is implemented in accordance with Microsoft guidelines. Since .NET is a language-independent architecture, developers have a wide choice of development methods for their solutions. Optimizely CMS is written in C#, but developers are free to use other programming languages such as VB.NET or F#. Optimizely CMS development in .NET is fully object-oriented. See the Microsoft .NET documentation.

From Optimizely CMS 12, the platform is built on ASP.NET Core.

Confusion around ASP.NET Core and ASP.NET

Optimizely CMS prior to version 12, is built on ASP.NET 4 (based on .NET Framework). Years ago, Microsoft announced that ASP.NET 4 would be replaced by ASP.NET 5, which would have a very different framework.

Later, Microsoft announced a another new platform, ASP.NET Core, and that they would continue with ASP.NET 4. ASP.NET 5 was said to be dead. ASP.NET 4 and ASP.NET Core was supposed to be equally good and would work together in parallel.

ASP.NET 5 is really the next version of ASP.NET Core, and once again ASP.NET 4 is dead in the water. The last improvements to .Net Framework were released with .NET 4.8.

The base Optimizely CMS Framework provides built-in editorial and administrative functions like version management, content preview, approval workflows, multi-language support, and access rights. Data is stored in an SQL database. The customized solution is built on top of this platform. Optimizely can run as an on-premise installation, or in the cloud. See System requirements for Optimizely . 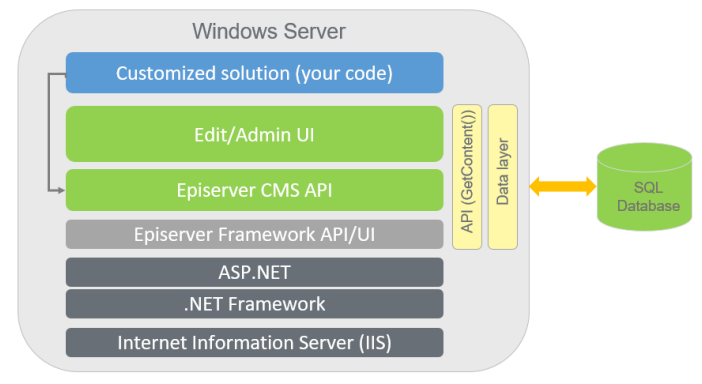 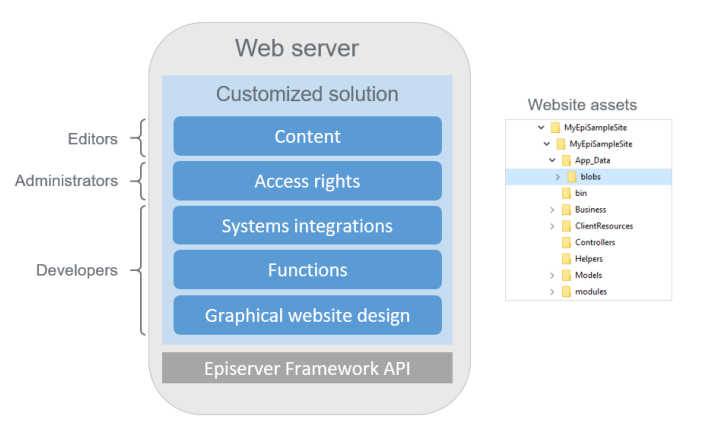 Optimizely uses Microsoft SQL Server to store content and other information created in the system. All database editions including SQL Azure are supported. A database with the Optimizely schema is automatically created when creating new sites from the Visual Studio integration. Each version of the database schema targets a specific version of Optimizely.

On-premises Optimizely sites in production typically use Microsoft Internet Information Services (IIS), which is a flexible, general-purpose web server that runs on Windows operating systems to serve requested HTML pages or files. When developing locally, you can use Kestrel or IIS Express which is included with Visual Studio, and then move to the full IIS when ready to go live. See Deployment.

CMS supports building templates both using server side renderered templates such as MVC and Razor Pages as well as using a client side framework.

Developing for the cloud

An Optimizely solution can be hosted in the cloud or on-premise. Cloud-based solutions are a cost-efficient way to manage websites, as these will dynamically scale out and in again depending on traffic volume, and the cost is based on usage and number of running instances. You can manage your cloud-based solutions yourself, or use Optimizely DXP.

Updated about 1 month ago