Cloud-based licensing works a bit differently than licenses used in an on-premises installation.

Optimizely licenses are available from the Optimizely license portal. As cloud-based environments could dynamically scale out and in again depending on traffic volume, the usage is based on number of running instances.

Instance Bound ("cloud licenses") used for cloud environments are tied to the number of running instances, with the necessary flexibility to operate on Azure or Amazon commercial clouds.

An instance bound license can be seen as an on-premises server license based on a floating number of instances. A cloud-based site will "call home" when activated to register its running web app instance.

This section describes how to activate instance-bound licenses to be used with environments running in Microsoft Azure.

If you are using Optimizely Digital Experience Platform (DXP), this is not needed, because Optimizely DXP has no instance validation and does not require manual activation.

In the following scenario, an Optimizely solution is running in two environments: one for test and one for production. You can use the same instance-bound license file for both environments. To avoid a license error, you need to define the same URL in both the test and production environments.

For each environment, go to the Optimizely Content Management System (CMS) admin view, and add the URL to be used. 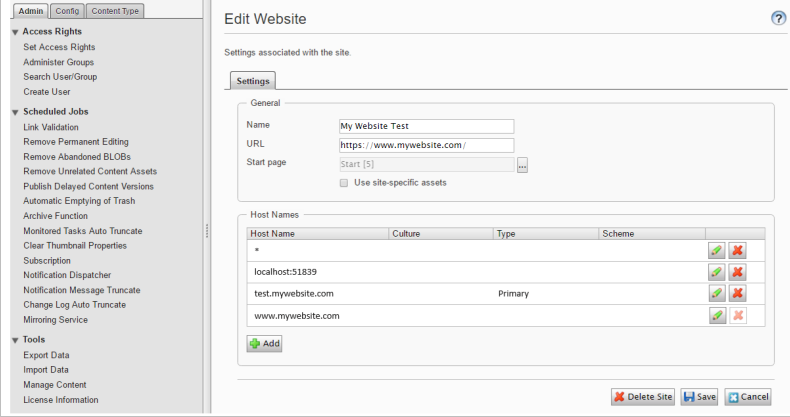 For each environment, go to the CMS admin view, and activate the license on both the test and production environments. The running instances are counted towards the total number of instances allowed by the license.

Behind a firewall, open communication with the licensing service on port 443 (SSL) for cloud-api2.episerver.com.

Behind a firewall, open communication with the licensing service on port 443 (SSL) for cloud-api.episerver.com.

The section describes how the instance counting works, and provides some practical guidelines for optimizing cloud-based licenses when used with Microsoft Azure.

Because the cloud license is a floating license, you can add and remove instances as needed for the traffic volume, as long as you do not exceed the total number of instances allowed by your license.

Instance counting is connected to the Azure server name. When scaling out, it does not matter how many web apps and deployment slots (see below) you have, because they share the same instances (servers). Only ensure that you are using an Azure App Service Plan that does not allow for more instances than the number of instances in your license.

If you use the same license in multiple Azure App Service Plans, (for example, to separate test and production environments), then the license has to support the combined number of instances.

A slot is an Azure feature to help avoid "cold starts" after deployment. Using slots, you can deploy a new version of your solution to a Web App staging slot, where the site is automatically warmed up. When completed, Azure swaps to the live environment. Optimizely supports deployments slots both technically and from a license perspective.

During a scale-up or a system upgrade, environments may temporarily be doubled, causing the instance limit to be exceeded. If this happens, an information notification appears in the edit view of the site. The front-end part will still be functional, and the operation of the site will not be interrupted. The notification disappears when the number of running instances reach an approved level. The message is also displayed if the communication to the Optimizely back-end is lost.

Switch between production and developer licenses