A sample installation of Optimizely CMS has several predefined scheduled jobs that are administered in the admin view. You can customize and configure scheduled jobs and create your own.

During the initialization of Optimizely CMS, the system scans through jobs and checks for their next execution time. At the appointed time, the system executes the job. Alternatively, you can execute a job manually from admin view. Scheduled jobs are executed in an Anonymous context. Because scheduled jobs are executed in the same process as the site, the site's web server must be up and running. To ensure this, use the IIS feature Application Initialization, or have a site supervisor periodically ping the site. In Azure Web Apps, enable Always On.

A standard Optimizely CMS installation comes with a set of built-in scheduled jobs, such as emptying the trash and managing the scheduled publishing of content. These jobs are available from the CMS administration view.

Scheduled jobs can be easily created using the Episerver Visual Studio extension. To implement a scheduled job, create a class that inherits from the EPiServer.Scheduler.ScheduledJobBase base class. Decorate the class with the ScheduledPlugInAttribute and define if the job should be enabled and what interval should be used initially. You can also assign a GUID to your job, making it possible to change the name or namespace of the job at a later time [New in Episerver CMS Core 10.3.0]. It is also possible to use a class that does not inherit the base class. Such a scheduled job is required to have a static method named Execute that does not take any arguments and that returns a string. You can also injected all dependencies from the constructor.

Example: A basic scheduled with the possibility to stop a job by overriding Stop method, as well as the ability to report progress through the StatusChanged event.

The example scheduled job as it appears in the admin view: 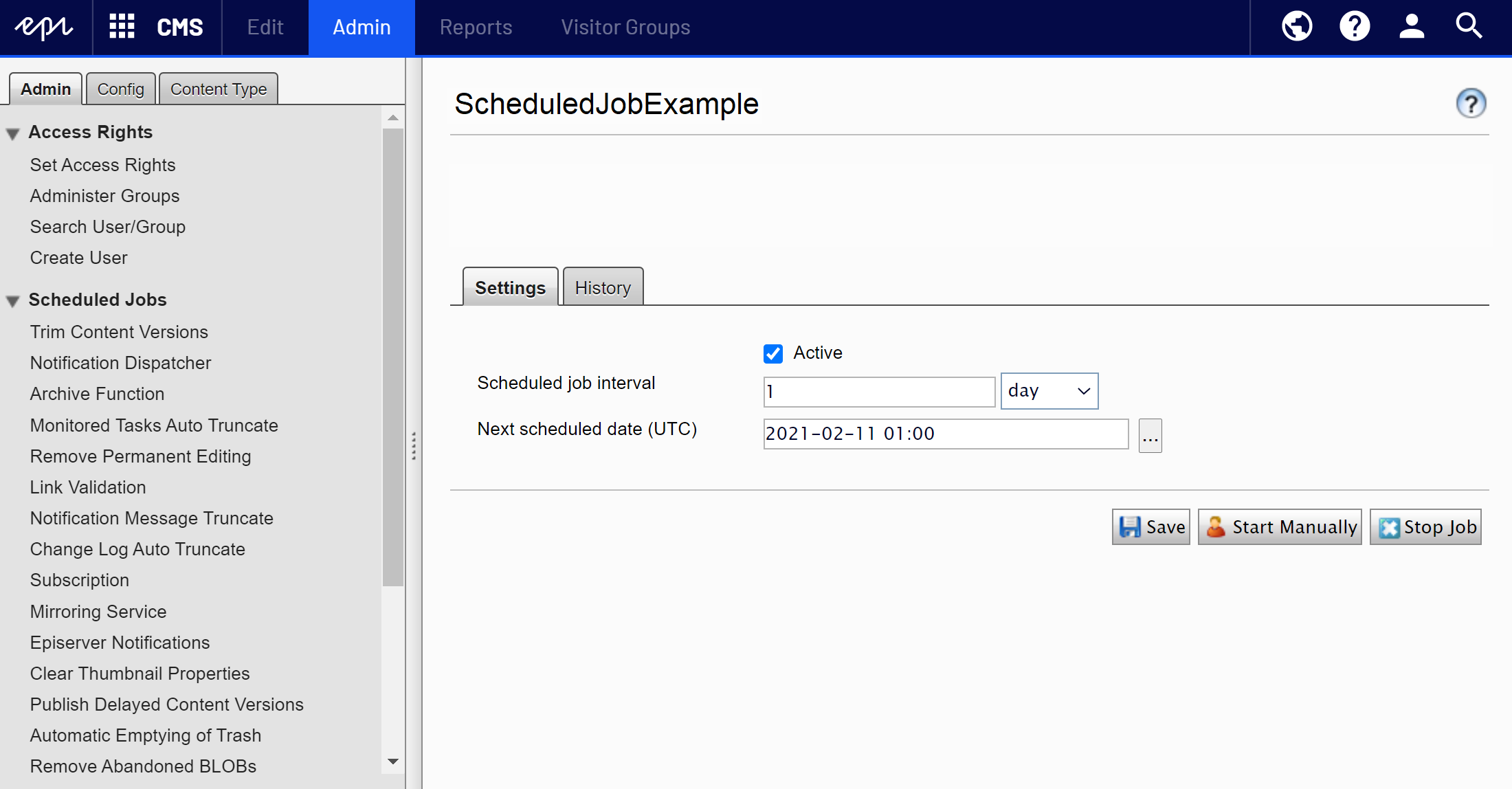 If several IIS sites share a database, such as in a load-balanced scenario, you can control which IIS site executes scheduled jobs. To do this, set the enableScheduler attribute to true on the applicationSettings configuration element on the site that should execute the jobs, and to false on the other sites.

If you configure several IIS sites to run scheduled jobs, each job is scheduled for execution on all sites. However, during execution, the first site that starts executing a job marks it in the database as executing, so the other sites do not execute that job in parallel.

If the IIS crashes or is recycled when a job is running, the scheduler runs the job on the next scheduled time by default. A restartable job is started again to make sure it can run to completion. The job can restart on any available server.

Set the Restartable property on the ScheduledPlugIn attribute. The job should also be implemented in such a way that it can be started repeatedly. For example, if the job processes data, it should be able to continue where it was aborted. It is also recommended to implement a stoppable job, but be aware that the Stop method is only called for controlled shutdowns which can be picked up by ASP.NET, and not for uncontrolled shutdowns such as an IIS crash or other external changes.

In the unlikely event the job is repeatedly cancelled, or the job itself is causing the shutdowns, there are a maximum number of 10 start attempts per job. When that limit has been reached, the job will run on the next scheduled time.

Content loaded from database and added to cache by scheduled jobs have a shorter cache expiration (default 1 minute), both since it is unlikely that the content will be used again and to keep down memory usage of long running jobs.

You can customize the expiration that is being set on content loaded from the database using the ContentCacheScope class.