The Optimizely framework is a set of NuGet packages that are part of a web application, which you can host locally or in the cloud. You upgrade Optimizely through Visual Studio and the NuGet package manager. New releases are available weekly to keep your solutions up to date.

Looking to upgrade to ASP.NET Core and CMS 12? See Why upgrade to Content Cloud (CMS) 12?.

Optimizely products consist of a main NuGet package with dependencies to other required packages. When updating, you only have to select the main package. 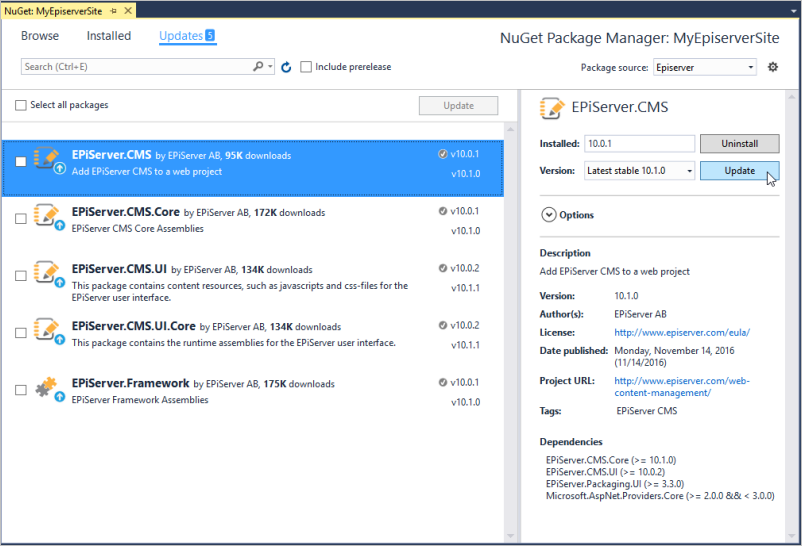 When the first digit is bumped, the release is called a major version. Major versions are releases that have some breaking changes. And by breaking changes, we mean that a developer may have to change something in their code before they can upgrade.

Instead of doing large releases once or twice a year, Optimizely uses a continuous release process with short development and test cycles, and release of new versions every week or fortnight.

This way each release only contains a limited number of features and bug fixes, speeding up the time to market and making upgrading smoother. Each new release package is cumulative, which means that it contains all previous updates as well.

As a developer, you decide how often you want to upgrade, but the more often you upgrade, the smoother it is.

How frequent should you upgrade?

The upgrade frequency of the Optimizely platform entirely up to you and is probably driven by specific feature and fixes that you want or need. Update packages are cumulative, but the longer you wait between upgrades, the more likely it is that bigger changes were introduced, which may result in a larger upgrade project.

If you find and verify an issue in the Optimizely platform, you should do the following:

See also the blog: EPiServer Continuous Release Process by Per Ivansson on June 19, 2014.

To quickly get access to new features that are being developed, you can install Beta features, see Beta features for more information on how to work with these.