If you are an advanced user of experiments, this detailed topic is for you. If you primarily use flag rollouts, this topic is not as relevant.

Bucketing is the process of assigning users to a feature rollout or to different variations of an experiment.

How users are bucketed

The Full Stack SDKs evaluate user IDs and attributes to determine which variation they should see.
During bucketing, the SDKs rely on the MurmurHash function to hash the user ID and experiment ID to an integer that maps to a bucket range, which represents a variation. MurmurHash is deterministic, so a user ID will always map to the same variation as long as the experiment conditions don’t change. This also means that any SDK will always output the same variation, as long as user IDs and user attributes are consistently shared between systems.

This operation is highly efficient because it occurs in memory, and there is no need to block on a request to an external service. It also permits bucketing across channels and multiple languages, as well as experimenting without strong network connectivity.

See also Interactions between rollouts and feature tests and our knowledgebase article Traffic allocation and distribution.

The most common way to change "live" traffic for an enabled feature flag is to increase it. In this scenario, you can monotonically increase overall traffic without rebucketing users.

However, if you change traffic non-monotonically (for example, decreasing, then increasing traffic), then your users can get rebucketed. In an ideal world, you avoid non-monotonical traffic changes for a running experiment, because it can result in statistically invalid metrics. One exception is if you're using our Stats Accelerator (typically as part of a mature progressive delivery culture). If you're using Stats Accelerator or otherwise need to change experiment traffic "live", you can ensure sticky user variation assignments by implementing a user profile service. For more information, see user profile service. User profile service is compatible with experiments, not with rollouts.

Let us walk through an example in detail of how Optimizely attempts to preserve bucketing if you reconfigure a running experiment.

Imagine running an experiment with two variations: variation_A and variation_B both set to 50% traffic distribution:

Additionally, the example experiment's traffic allocation is set to 40%: 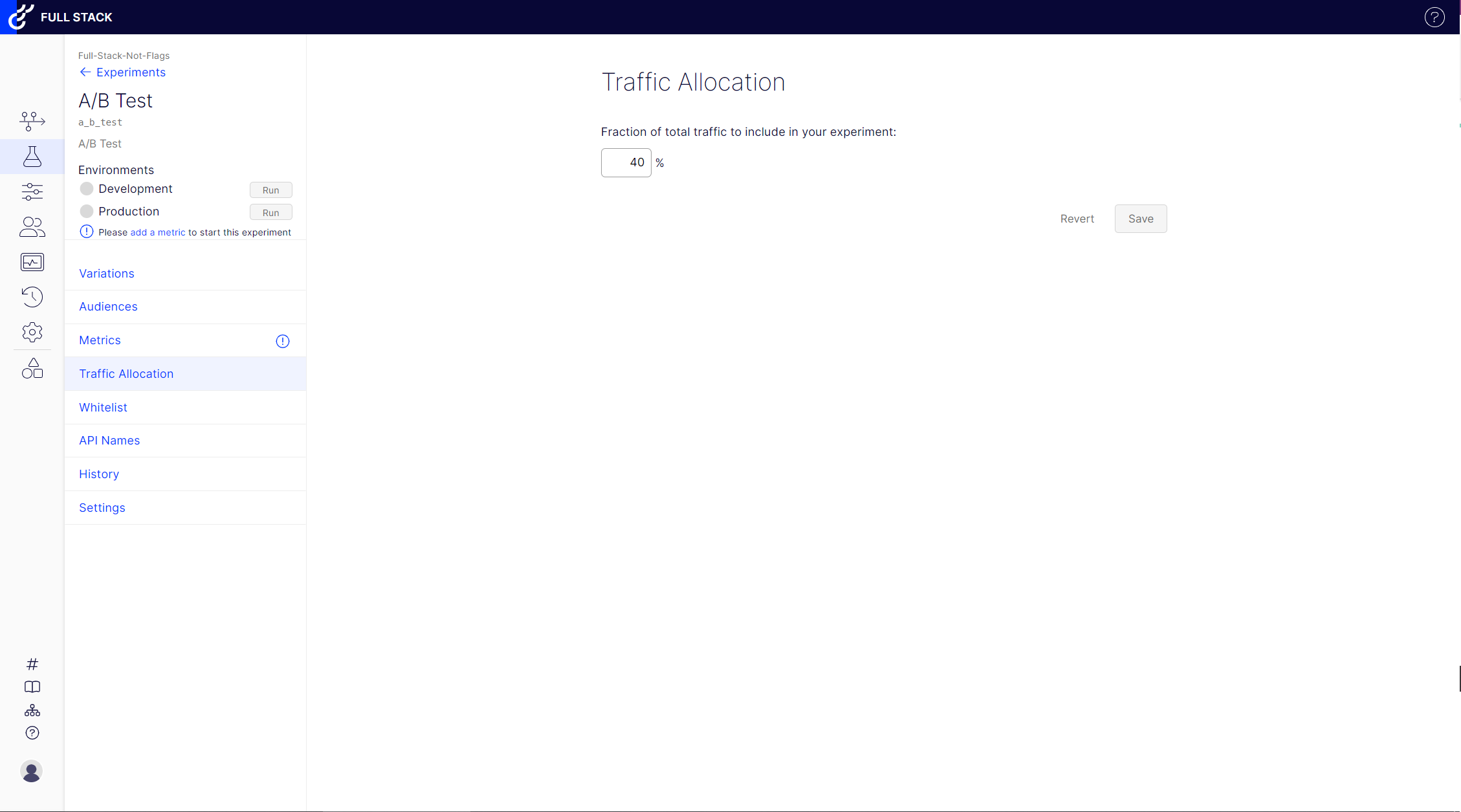 In this example, if you change the experiment traffic allocation to any percentage except 0%, Optimizely ensures that all variation bucket ranges are preserved whenever possible to ensure that users will not be re-bucketed into other variations.

If you add variations and increase the overall traffic, say to 65%, Optimizely will try to put the new users into the new variation without re-bucketing existing users.

On the other hand, if you reduce the total experiment traffic allocation from 40% to 0%, bucketing will not be preserved. After changing the total experiment traffic allocation down to 0%, if you change it again, perhaps to 50%, Optimizely starts the assignment process for each user from scratch: Optimizely will not preserve the variation bucket ranges from the previous 40% setting.

The following table highlights how various user-bucketing methods interact with each other:

If there is a conflict over how a user should be bucketed, then the first user-bucketing method to be evaluated overrides any conflicting method.

For a comprehensive bucketing view, let us walk through how the SDK evaluates a decision. This chart explores all possible factors, including beta features like bucketing ID.